For The Love Of Golf 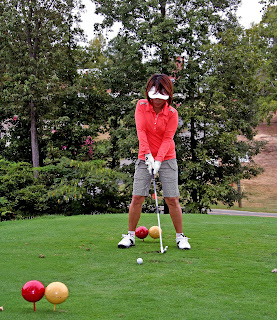 AFTER a long MEDIA SPOTLIGHT that’s made coverage of other big scandals this year look like a town council meeting, Tiger Woods finally issued a statement on Friday saying, “I have decided to take an indefinite break from professional golf.”
“I am deeply aware of the disappointment and hurt that my infidelity has caused many people, most of all my wife and children,” Tiger said at his Web site. “What’s most important now is that my family has the time, privacy, and safe haven we will need for personal healing.”

The reason for an “indefinite break as,” Tiger said, “I need to focus my attention on being a better husband, father, and person.”

Definitely, Tiger’s latest statement and the circumstances surrounding it will be examined and debated in the days and weeks ahead with great zeal. An infinite theories will be hatched and debunked. And the media  frenzy will rage on. I would imagine more people who wants to take a 60 seconds to fame will take advantage of the situation and strike while the iron is hot.

As a very avid golf fan, I have a simple response to Tiger’s statement and his desire to call a timeout: OK.

Tiger is my favorite golfer. I don't watch golf tournament on tv unless Tiger is playing. I am so frustrated to know about his infidelity but it has nothing to do with the sport he played so well and dominated that made me love and admire him so much. Besides I understand the pressures he must have to overcome being  as successful as he is.

I am his big fan and I will forever admire him as a transformative figure in golf. I will definitely root for him now, as well as his wife, Elin, and their children. I root for marriages. They’re not easy for anyone and harder for many. I also root for families, especially children, who have the most to lose when moms and dads fracture.

And I will root for golf.

I'm sure it's still a long road to travel for Tiger Woods. But like any other scandals of the rich & famous in the past, this too will come to pass. He does need sometime or however long it takes to get something worked out. He shouldn't worry about bouncing all the way back (as an endorsement force), as sociologist Dr. Harry Edwards said. "The one thing we know is that when a ball drops from 15 feet when it bounces back up, it's only going to rise to 12 feet."

It's been said that while golf will never be the same in the Tiger era—especially since the Tiger golf economy may implode like the U.S. financial system did a year ago—it will survive as a game and professional sport. Golf made Tiger; he didn’t make golf. He just made it thrilling, heroic and much, much richer.

The luster may be gone, the money may dry up, the TV ratings may tank—which is all very sad and detrimental to the livelihoods of many people—but the game that made Tiger is still a great game. This scandal, and any future scandals, can’t change that.

My love & passion for golf will always be the same...